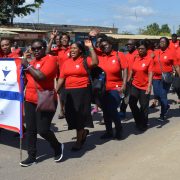 In a statement to commemorate the 2019 World TB Day Mr Michelo, noted that TB continues to be a major public health problem in Zambia and the world over.

Mr Michelo stated that without proper attention, patients with TB can go undiagnosed and untreated resulting in spread of the disease and the development of Multi-drug Resistant Tuberculosis (MDR-TB). He stated that as an organisation that seeks the highest level of professionalism and integrity in the delivery of health care services to the community ZUNO has noted with concern the existing knowledge gaps on TB/MDR-TB among healthcare workers, poor management of patients on TB treatment and poor infection control which are enemies in the fight against TB.

Mr Michelo said it is an undeniable fact that TB has a devastating impact on the health, social and economic aspects of life adding that nurses are better placed to influence prevention and management of TB in communities and workplaces.

“Our practice as nurses entails that we are in close contact with our patients 24 hours a day, making us better placed to detect, diagnose, and treat TB cases” he noted. The 2019 World TB Day is being commemorated under the global theme: “It’s Time” and localised “It is Time to Kick Out TB” which is a call to action to fight TB at individual, national and global levels.