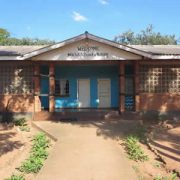 Health Minister Chitalu Chilufya, who announced the upgrading of the institution at the weekend in Macha area in Mbabala Constituency of  Choma, described the institution as rare feet, which had contributed to saving thousands of lives through the human capital trained at the school.

“We have upgraded the old Macha to the Registered School of Nursing. It will this year in July enroll the first intake.

“This was a happy moment for me, pronouncing the institution from Zambia Enrolled School to a Registered School of Nursing. This institution has trained so many nurses where thousands of lives have been saved through the human capital trained here, this institution is a rare feat,” Dr Chilufya said.
Dr Chilufya said the Government had also embarked on infrastructure development at the institution and spent K1.2 million on the construction of the dining hall and a skills lab.

The minister was also taken on a tour of the School, Hospital and also toured Macha Research Institute, which were all run by the Brethren in Christ Church.

Macha Mission Hospital acting medical superintendent John Spurrier said the hospital had been able to record a number of successes in disease reduction because of community involvement.

Dr Spurrier said through working with the community about 70,000 people in the area all underwent HIV/AIDS tests.

He commended the Government for its efforts in the fight against HIV/AIDS.
“The people in the community are willing to be tested. Last year we tested 70,000, this is so because of the relationships that we have developed,” he said.

Meanwhile, the Government has found a partner to rehabilitate the old wing of the Choma General Hospital.
Dr Chilufya said the old hospital wing, which was earlier earmarked for demolition would now instead undergo rehabilitation.

“I would like to inform you that the old hospital will be rehabilitated, we have found a partner who is willing to renovate the old structure,” Dr Chilufya said.