News Updates
You are here: Home1 / News Updates2 / News3 / All 1,600 recently recruited nurses and health workers to be paid 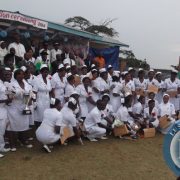 GOVERNMENT has called for calm and assured that all the 1,600 nurses and health workers who were recently recruited will soon be put on the payroll to bring the matter to rest.

Ministry of Health Director Health, Promotion and Determinants Kennedy Malama further revealed that all the Human Resource Officers (HRO) from all provinces have since been summoned to Lusaka for a meeting at the Payroll and Management Establishment and Control System (PMECS) to discuss and conclude the matter.

Dr Malama in an interview yesterday said 1,600 workers were affected but was happy that the issue which was being handled administratively was almost concluded and reaffirmed Government’s commitment to bringing the matter to a close.

Dr Malama said of the 7,400 staff only 1,600 were remaining and assured that the matter would soon be concluded and that the ministry was working towards closing the chapter.
“I would like to state that the issue of some of our staff not being on the payroll was receiving attention and as I speak all the HRO who are key in this matter have been summoned to Lusaka to conclude the matter, ”he said.

He paid tribute to the workers for their commitment to duty and that the issue was not meant to punish them.

Zambia Union of Nurses Organization (ZUNO) chairperson Ernest Mumba said the union was disappointed that over 300 members on the Copperbelt were not on the payroll and had been made to work without pay and that it has continue to engage the Government.

Meanwhile, today’s celebration of nurses day has been postponed to a date to be announced due to the national mourning of freedom fighter Salome Kapwepwe.

Nursing Union demands for safer theatres in the Zambia