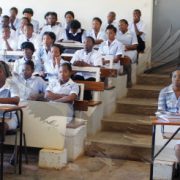 KITWE School of Nursing, Midwifery and Theatre principal nursing education officer Mavis Chingezhi says the enrolment levels for the midwifery programme are on the decline as most registered nurses are opting for a degree in nursing instead of specialising.

Ms Chingezhi said the trend is worrying because it has the potential to reverse the strides the country has made so far in reducing maternal and infant mortality rates.

The school is considering adopting the non-quota system practised by universities where first year students are enrolled in a particular school and later admitted into specific programmes depending on the number of points they make.

In the past, the school could enrol up to 60 students for the midwifery programme that runs for one year but in the past two years, numbers have been dwindling, with very few people collecting enrolment forms for the January 2018 intake so far.

“Last year we had 45 students, this year we have 42. I don’t know what will happen next year. I am worried because at the moment we are selling forms but only one has been sold so far,” Ms Chingezhi says.

And Ms Chingezhi said the school is soon expected to introduce a new programme in public health nursing.

The Ministry of Health has nominated the Kitwe School of Nursing, Midwifery and Theatre to pioneer a programme in public health nursing focusing on disease prevention and promotion of health.
Ms Chingezhi said the school is prepared to offer the programme that is expected to start around June – July this year after the General Nursing Council gives a go-ahead on whether or not the school has the capacity to offer the programme.

The Kitwe School of Nursing, Midwifery and Theatre is this September expected to graduate its first batch of registered nurses that have pursued their studies via e-learning.
Ms Chingezhi says the school also needs a bigger bus for its 420 students.

All 1,600 recently recruited nurses and health workers to be paid